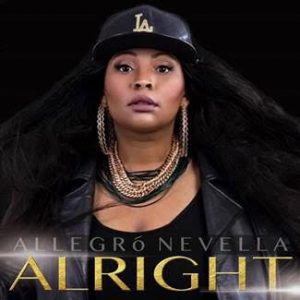 Musical genes run in families and Dreambridge Recording Artist Allegró Nevella’s family is no exception.  The younger sister of Gospel icon Yolanda Adams, Allegró and her siblings were all bitten by the music bug. However, Allegrós musical path is slightly different from her sister’s; she is a premiere MC. Known as a gifted rapper delivering head-spinning rhymes, she’s been rapping for decades. She’s toured with her sister with other Gospel greats such as Kirk Franklin, Donnie McClurkin, Anthony Evans and Smokie Norful. Now the artist is releasing a new single entitled “Alright”. The single, distributed by eOne, is available on digital outlets.
The song, “Alright”, is hip-hop and inspirational experience. Produced by The Deceptaconz, the track –flaunting a strong West Coast vibe – spoke to the rapper the moment she heard it. “When I got the track, my producers and I just kept hearing, ‘It’s gonna be alright’”, says Allegró. “That’s the message I want people to hear. One of my favorite parts of the song is the line: ‘Today is a good day. Better speak it. Better speak it; it’s a great day. Go ahead and kick it; like you celebrate your birthday, a birthday celebration on your worst day?’”. Allegro likes the lyric because she understands that in spite of what comes in life, a positive attitude and faith in God can overcome any obstacle. The song is a personal one for the artist and came during a time when Allegró had to encourage herself. A Pastor told her once that she was “too worldly for the church and too churchy for the world”.  In spite of that, she knew she had something to share with the world. It wasn’t until she saw the success of Lecrae that she felt it was time for her to take her ministry to the next level. Part of that process is the release of her upcoming project.
The forthcoming project is in two parts; it’s a documentary and soundtrack entitled Bloodline. The release will follow Allegró through her beginnings in Houston, her musical roots and the legacy she wants to leave. As a member of the famed Adams family, she realizes that music is her musical birthright. “Church wasn’t just something that we did,” shares Allegró. “We learned about having our own personal relationship with God. Music and faith are in the blood line; it’s part of our inheritance.” She started rapping when she heard a cousin rap. Her sister, Yolanda, rapped on a song called, “You Know That I Know”.
Growing up, she was surrounded by music. Her mother, Carolyn Jean Adams, was a classically trained musician who received her degree in music and shared it with all of her children. She was also a music director/musician at churches as well. As a youth, Allegró felt a calling to act and performed in musical theater productions. She first took to the stage in the play Gospel at Colonus at the age of 7. Gifted as a writer as well, she studied the subject at the University of Houston. The merging of faith, music and spoken word created the dynamic performer she is today. Known as an eclectic artist, her influences range from Johann Sebastian Bach to Stevie Wonder to TuPac Shakur.
In 2012 Nevella was featured on DNA of a Winner with the group, Chrome Cats, and received over half a million views on YouTube within the first week. In June 2015, Allegró was featured on GRAMMY Award winning artist and producer Missy Elliott and Gospel duo 21:03’s remix, “Nobody Bigger”. Her first single, “Made It Out”, was featured on DreamBridge Recordings Rise Isaiah 60:1 compilation.  Her brand new single, “Alright”, will be featured on her upcoming documentary and soundtrack Bloodline scheduled to release in 2017.