Demetrius West and Jesus Promoters Get Ready For New CD 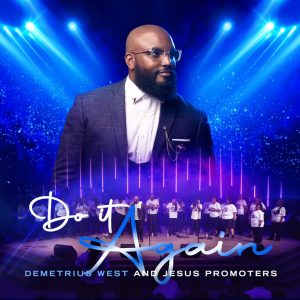 Blacksmoke Worldwide Music recording artist Demetrius West took to social media to unveil the cover for his upcoming CD, Do It Again.  The Indianapolis based Demetrius West and Jesus Promoters garnered praise and with the release of their inaugural nationally released disc Choirology, which featured the Billboard top radio hit, Open the Floodgates. Their new lead single, I’m Next, has had its own success at radio, rounding out the top 20 just this week.

“We count ourselves blessed,” says West.  “We are blessed to be counted worthy to share the love of Jesus with people all over this nation.  God has favored our ministry and afforded us another chance to take the message to the uttermost parts of the earth.  I am excited that people are inspired by the music and lives are changed because of it.  This new disc has something for everybody.  As I am an old soul trapped in a millennial body, I wanted to give people something that would bring joy to their hearts. We just celebrated the birthday of one of the greatest contributors to Gospel music in the person of the late Bishop Walter Hawkins.  I’m so incredibly grateful that JP had a chance to do Just in the Nick of Time, a Walter Hawkins song on this CD.  Its just an authentic indication that good music never has an expiration date, it’s the gift that keeps on giving.”