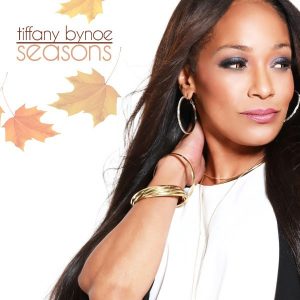 Chart-topping pop artist Tiffany Bynoe  ushers in fall with the release of her latest single, “Seasons”  on SRT Entertainment. Produced and written by Kyle Bynoe, who has over 25 years of experience as producer, songwriter and recording artist, and has worked with the likes of Mary J. Blige and Clive Davis, among others, the song’s production is as strong as the message.

“We all go through seasons in life,” says Tiffany. “I hope this song will bring hope and encouragement to people regardless of the season  they are in.”

The song has been impacting radio for just over two weeks, and has already received several adds and garnered critical praise. “Seasons” hits iTunes October 2 and is a pre-cursor to Tiffany’s upcoming EP, expected to release early 2016, with a tour soon to follow.

While readying the new project, Tiffany continues to work on behalf of her foundation, Gabby’s Heart, which brings awareness and raises funds to support research for pediatric cardio health. Tiffany founded the organization to honor her daughter, Gabby, who, though healthy today, was born with dextracardia, a severe heart defect.

“If you saw her today, you’d never know there was ever a problem,” says Tiffany. “It just goes to show how God truly walks you through different seasons of your life. Even when things don’t make any sense at all, He stays with you through the winter, into spring with new mercies everyday. He is the redeemer of time.”

Tiffany Bynoe is a chart-topping recording artist whose resume is as diverse as her audience. Committed to rising above genre she has enjoyed significant success in both the Gospel and main-stream music industries. At the age of sixteen, she was a three-time winner at the Apollo theater and had signed a record deal with Pendulum Records, with whom she released a single that soared to the No. 1 spot on Billboard. Today, following a hiatus from the industry, she is readying her latest studio project, He Only Sees Red. A bold sweeping move towards the Contemporary Christian market, the vocalist, speaker, author and minister is poised once again to dominate charts of multiple genres and styles. The project’s first single, “Seasons,” has already received widespread support upon its release to radio, heightening anticipation of the full project, which will release in early 2016.
In addition to music, Tiffany is the founder of a non-profit organization called Gabby’s heart, in honor of her own daughter, who was born with a potentially fatal heart condition.
2016 will see the launch of the He Only Sees Red tour, which will be officially announced towards the end of 2015. For more news, music and touring information, visit www.tiffanybynoe.com.