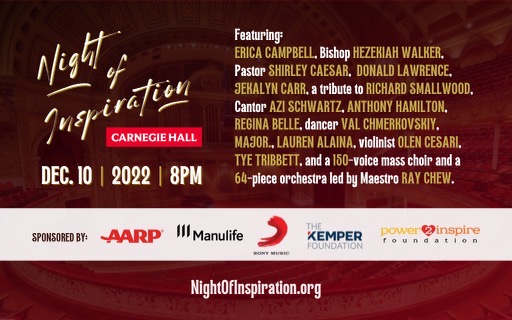 On Saturday, December 10 at 8:00 p.m. Carnegie Hall presents the highly anticipated return of A Night of Inspiration, an uplifting evening of music, dance, and spoken word from diverse traditions in Stern Auditorium / Perelman Stage. Under the direction of acclaimed producer, composer, and music director Ray Chew, and co-produced with his wife and business partner, Vivian Scott Chew, the exciting program features an all-star roster of artists from around the globe including Regina Belle, Shirley Caesar, Erica Campbell, Jekalyn Carr, Olen Cesari, Anthony Hamilton, MAJOR., Donald Lawrence, Cantor Azi Schwartz, Tye Tribbett, and Bishop Hezekiah Walker, with additional artists to be announced. The stellar lineup will be accompanied by a 64-piece orchestra and a 150-voice multicultural choir, culminating in a special tribute to gospel great Richard Smallwood including a feature performance and 20 year celebration of his legendary song “Total Praise.” Dancing with the Stars veteran Val Chmerkovskiy will also perform an original dance number to show solidarity with his fellow Ukrainians suffering through the war with Russia. Sherri Shepherd will make an appearance as one of the evening’s star presenters.

“We recognize what a magnificent blessing it is to be chosen to inspire others through the arts,” said Ray and Vivian Chew. “Due to the pandemic, it has been four years since we have been able to offer this command performance of A Night of Inspiration. After such a trying time, we are truly excited to bring us all together to celebrate in the spirit of unity.”

Carnegie Hall’s rewarding collaboration with Ray and Vivian Chew began over a decade ago in 2009, when Ray served as musical director for two concerts during Carnegie Hall’s festival, Honor!, celebrating the African American cultural legacy with artists spanning blues, jazz, gospel, R&B, soul, and beyond. Since 2010, the duo has since presented three A Night of Inspiration productions in Stern Auditorium / Perelman Stage to packed audiences featuring a large-scale orchestra joined by high profile artists from the gospel and secular communities. The Chews have been involved in a number of other notable Carnegie Hall performances throughout the years including A Tribute to Motown, paying homage to the distinctive soul sound of the legendary record label’s over 50-year legacy; a one-of-a kind participatory concert featuring gospel music’s biggest stars, Donnie McClurkin and Kim Burrell; The Music of Stevie Wonder, a sing-a-long performance honoring the iconic performer’s beloved songbook and featuring R&B stars Leela James and BeBe Winans; and Sounds of Change, featuring a stellar cast of artists performing folk songs and R&B classics that defined a generation, as part of Carnegie Hall’s citywide festival The ‘60s: The Years that Changed America. In summer 2019, as part of the free Carnegie Hall Citywide concert series, Ray and Vivian brought A Night of Inspiration to Bryant Park for an uplifting evening under the stars; they presented Ray Chew Live!, another lively outdoor celebration, in Denny Farrell Riverbank State Park and the Robert F. Smith Center for the Performing Arts last September.

“A Night of Inspiration” is grateful for the support of its sponsors, including AARP and Manulife. More sponsors to be announced. 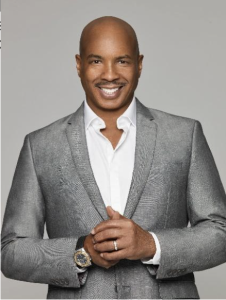 About Ray Chew
Music Director, Producer, and Composer Ray Chew’s work can be found across multiple networks in various TV offerings, both in front of the camera and behind the scenes. His mark across the TV landscape can also be found on various NBC Specials including the Macy’s Annual Fireworks display, the Annual Macy’s Thanksgiving Day Parade, The Rockefeller Christmas Tree Lighting and a special supporting Broadway Cares – One Night Only: The Best of Broadway. Chew recently returned to the Dancing with the Stars ballroom as Music Director for his 15th straight season, the hit show now airs on its new home at Disney +.

Chew’s tenure as music director for series network television started in the 90’s with the longest running show in syndication – It’s Showtime at the Apollo (NBC). Other series include Singing Bee (NBC), Sunday Best (BET), Rising Star (ABC), American Idol (FOX), and I Can See Your Voice (FOX).

Chew’s work with orchestras as a conductor and a composer has carried him to prestigious venues all over the world. From the Hollywood Bowl in L.A. to the Nobel Peace Prize broadcast in Norway to Carnegie Hall and Lincoln Center in New York.