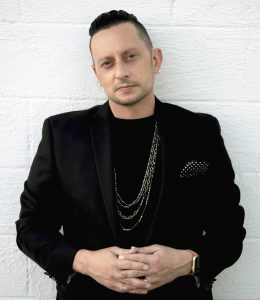 “I have huge respect for Fred and the DarkChild Gospel family. He’s worked with some of the greatest and helped create music that will live on forever. His accolades speak for itself, but his integrity, grind, and old-school do what you say, say what you do vibe is refreshing to say the least. To join hands and see what we can together do, is exciting,” states Popin.

Born in Middletown, NJ, Bryan Popin was a piano protégé by his early teens. Later in his career, the legendary Stevie Wonder nicknamed him the “Little Boy Wonder” and he’s continued to impress with his songwriting, keyboard skills, and vocal flow. He’s appeared with Bishop T.D Jakesnumerous times and was featured at both MegaFest and Bishop Jakes’ Pastors & Leader’s Conference. He’s written with R&B legend Chaka Khan, American Idol alum Danny Gokey to name a few. At the height of their popularity, Justin Timberlake’s *NSYNC recorded one of Popin’s songs for their multi-platinum album, Celebrity and performed the song during their final stadium world tour.

About DarkChild Gospel:
Launched in 2006, DarkChild Gospel was founded by super-producer and record executive Fred Jerkins. Since its inception, the label has released artist and projects including Virtue, Bubby Fann and Praise Beyond, Jermaine Dolly, and ‘A Project of Healing’ compilation project to name a few.