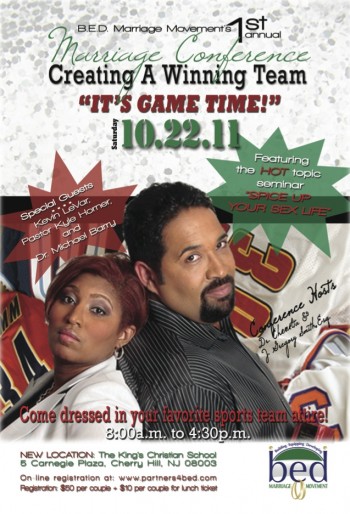 The Building Equipping and Developing (B.E.D.) Marriage Movement will officially launch on Saturday, October 22, 2011.  B.E.D.’s Annual “Creating a Winning Team –  It’s Game Time!” Conference will kick-off the launch and will be held in Cherry Hill, New Jersey at the King’s Christian School.  Special guests include Kevin LeVar of the Forgive and Live Campaign, Dr. Michael Barry of the Release Now program, and Pastor Kyle Horner of the Connect Church Cherry Hill, NJ/Philadelphia, PA.

“Marriages don’t come with a ‘How to book.’  Most marriages fail because people just don’t know how to overcome some of the common challenges being married brings.  We don’t think couples start a marriage with the thought of ending in divorce.  Most spouses have a primary intention to grow old together, “ says Pastors Greg & Chevelta Smith, the founders of the B.E.D. Marriage Movement.  “We started B.E.D Marriage Movement in hopes of providing couples with the tools necessary to build, equip, develop, and sustain a healthy marriage.”

Couples will attend dressed up in their favorite sports team jerseys; waving terrible towels and fully representing their teams (both sports and marriage) in anyway they desire!!!

Although they live busy lives as an Assistant Prosecuting Attorney & Obstetrician/Gynecologist; Pastors J. Gregory & Chevelta Smith have accepted the challenge to build, equip, and develop marriages within the Body of Christ.  J. Gregory Smith, Esq. & Dr. Chevelta Smith have been leaders of marriage ministries for 11 years.  They are currently the pastors of F.L.O.W. Center in Cherry Hill, New Jersey.  Over the years, this power couple has become known for the “realness and transparency” they demonstrate so genuinely during their tag team presentations.  They are known to have a style that is truly “out of the box” and innovative.

Past conference attendees Brianna & Greg stated,  “The marriage conferences were eye-opening and life-changing! From the transparency and testimonies of the speakers to the topics covered to interactive and fun sessions, we enjoyed every minute!”

Throughout history, movements were often initiated by individuals to bring an awareness that something needs to change and occur through communication, ideas spreading throughout a community, and support.  Major movements such as Women’s Rights, Civil Rights, Gay Rights, AIDS awareness, Breast Cancer Awareness, and Anti War movements have transformed society in remarkable ways.

B.E.D. Marriage Movement is a movement purposed to bring awareness to the church and society of their need to fight against the onslaught of divorce and separation that plagues married couples today.  It is purposed to make a significant difference in the fact that research shows that the divorce rate is the highest within the Body of Christ in comparison to the general population.

Like any movement, success will depend on its support and ability to spread throughout the community and ultimately our nation!  Take action to build, equip, and develop your own marriage!  Take the first step now!  Join the B.E.D. Marriage Movement and create momentum.  Register now for the conference at www.partners4bed.com.  Tickets only $50 per couple, with optional $10 per couple  breakfast/lunch ticket.  Opportunities to sponsor a couple are also available.  Email info@partners4bed.com or call 609.435.1BED (1233) for more details.