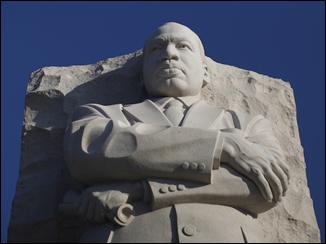 Almost five decades after Dr. Martin Luther King, Jr.’ gave his “I Have a Dream” speech; he is being honored with a national monument in Washington, D.C. August 28, 2011, the actual 48th anniversary of the speech, is when the monument will be dedicated to the Civil Rights Activist. Thousands are pouring into Washington, D.C. for a week of events leading up to the unveiling ceremony where President Obama will speak Sunday morning.

The life and mission of Dr. Martin Luther King Jr. embedded itself into the fabric of American life and without question, had the greatest impact in advancing rights for minorities in the latter half of the 20th century. His works and accomplishments are being recognized with a national monument in his honor in Washington, D.C. that opened Monday.

African-American pastor and High Impact Leadership Coalition founder Bishop Harry Jackson Jr. said of the King monument, “As a Christian, I am really excited. Such a memorial shows the power of an individual life and the power of prayer.”

Jackson, who says he was 11 or 12 at the time of the 1963 “I Have a Dream” speech, prayerfully watched the march with his father in their hometown of Cincinnati, Ohio.

He says King’s influence is reflected in the election of Barack Obama, the first African-American president, and now permanently recognized with the erection of the King memorial.

The memorial includes a 30-foot high-sculpture of King’s likeness, arms folded across his chest and standing tall, hewn in a “Stone of Hope” just beyond a mountain-like portal.

The memorial’s design is meant to embody King’s words in his famous 1963 “I Have a Dream” speech: “With this faith we will be able to hew out of the mountain of despair a stone of hope.”

The tribute, located near the Tidal Basin, also features a marble inscription wall featuring many of his most memorable quotes, including, “I have the audacity to believe that peoples everywhere can have three meals a day for their bodies, education and culture for their minds, and dignity, equality, and freedom for their spirits” and “Injustice anywhere is a threat to justice everywhere.”

The memorial makes King the first African American and the first person not elected as a U.S. president to be honored on the National Mall.

Despite his excitement for the memorial, Jackson says the memorial is a reminder that King’s dream that began over 50 years ago has yet to be completely fulfilled.

Noting the 53 percent decline in wealth and 15.9 percent unemployment among African Americans, Jackson stated King would be disappointed with the way future generations have not embraced the spiritual and moral values of his day.

Instead those generations have allowed material possession to lead them astray, he believes.

“Middle and upper income African Americans are busy enjoying their fancier homes, buying their more beautiful cars and maybe sacrificing their children on the altar of their own success because they are never there and they have not kept their own marriages and families together,” Jackson described.

Jackson says of the younger generation, “Many of them have thrown away the opportunities available to them.”

“Dr. King said, ‘The negro cannot win if he’s willing to sacrifice the futures of his children for personal comfort and safety.’ American has certainly done that,” she said.

She says that the Bible puts a special emphasis on love. Because of that emphasis, she says we must love one another and stop killing each other with violence, abortion and selfish ambition.

Ms. King says she hopes that people will be inspired by Dr. King’s memorial to reconnect with his messages, not only of racial equality, but love in the kingdom of God.

Jackson reminds people that King was not just a civil rights leader, but also a theologian who spoke from an understanding of both the U.S. Constitution and the Bible.

Martin Luther King Jr. pursued theology studies at Crozer Theological Seminary in 1948 and Boston University in 1955 before joining the fight against racial inequality.

Following his ordination, King served at his Father’s church, Ebenezer Baptist in Atlanta, as assistant pastor. After finishing his doctoral studies at Boston University, he became the senior pastor of Dexter Avenue Baptist Church in Montgomery, Ala.

During the civil rights movement, Alveda King says her uncle preached about love and fellowship in the body of Christ.

“He worked very hard to help all people to find the love of God,” she affirmed.

On the Aug. 28 official unveiling of the monument, she says, “We’re going to remember that dream.”

Alveda King says she will recall Martin Luther King’s messages of love and the universal family of God in her scheduled address.

President Obama is also scheduled to speak at the unveiling.