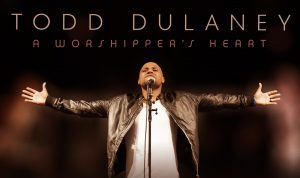 What is all the buzz about? Prior to the April EOne release, Dulaney’s name has rung out synonymously with worship experiences for quite some time. The first major release from the Illinois native is titled “A Worshipers Heart”.

This was initially a very interesting musical journey for me. However, an Interesting journey eventually turned into a wonderful one full of depth and heart.

But enough small talk- let’s dig in it!

Dulaney opens up with an upbeat praise and worship song called “Dance in the Rain”. This song feels really great- well. It becomes a run on sentence after a while. The writer had a lot to say which could have been made into at least two songs. I loved the first half of the song. Everything else thereafter takes away the beauty and excitement of Rain.

It’s not until the maturity of his music shines through mid album that you begin to realize what you were missing from the former tracks.

“Greater” is what I call perfection. This is a duet that was so well orchestrated. The vocal choices that these two made were perfect. “No power is greater than You”.

“Unchurched” is another intellectually stimulating song. He comes from the perspective of a person who recognizes that he loves and needs God but doesn’t look or act like the traditional church person. He feels scrutinized and criticized so is a bit confused. Wow! Wow! This is a must-hear.

“Victory belongs to Jesus” is certainly single worthy! He uses the reprise to introduce his singers! Sing yall!! Singers will enjoy every single vocal presentation.

I really enjoyed this album and did not choose a favorite track because it all felt so good.

This is certainly a solid, great record. Todd Dulaney- the wait is over and we are glad you are here!

I give this album 4 star.